Cartoon elephants do, indeed, exist. The question is whether or not you believe in the existence of your own elephants.  In truth, life will be much harder for you if you go around pretending that you don’t really actually feel the way you feel. 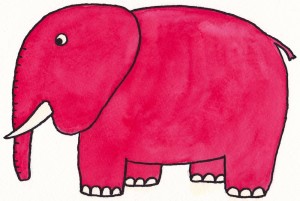 It can be that other people have worked hard to convince you that cartoon elephants do not exist- and that you have started to believe them. For example, someone might be saying, “You shouldn’t feel that way! No one else feels that way. I have the answer to your problems, and there isn’t any option for you to react to it. I want you to behave a certain way, and I will be angry or punish you for it if you don’t. I don’t care what you have to say about it. Talking about your own reactions is not an option.”

In reality, cartoon elephants do not go away because people ignore them.

Paying attention to your cartoon elephants means doing some hard work of figuring out what, exactly, is being felt. It is certainly possible that your cartoon elephants are right there, trying to get your attention. Perhaps there have been so many barriers to their discovery that ignoring them takes twice as much effort as figuring out what they are trying to tell you.

Stop pretending they are not.